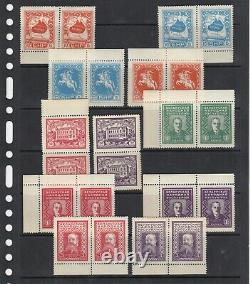 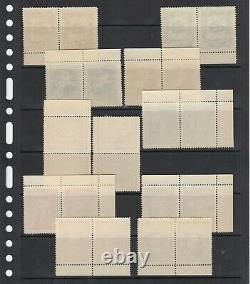 Coat of arms Map Belarus 1949 BNR in exile Rosenheim DP Camp MNH set 11 v perf X 2. Very Rare G enuine Original. The advance of the Red Army in 1945 forced the Rada of the BNR to relocate to the Western part of Germany, occupied by British and American troops.

In February 1948, the Rada passed a special manifesto, by which it declared its return to activity. In April 1948 the Rada, together with representatives of the Belarusian post-war refugees, held a conference in Osterhofen, Bavaria. The primary activities of the Rada BNR in the West were lobbying and contacts with Western governments to ensure recognition of Belarus as a separate country.

Together with other anti-Soviet organisations in the West, including governments in exile of Ukraine and the Baltic countries, the Rada protested against human rights violations in the Soviet Union. In the 1950s the Rada BNR enabled the creation of the Belarusian edition of Radio Free Europe. Members of the Rada organized support to Belarus following the Chernobyl accident of 1986. Please wait for my invoice or request. I will be happy to answer you.

This item is in the category "Stamps\Europe\Germany & Colonies". The seller is "stamp4all" and is located in this country: BY.

This item can be shipped worldwide.